The author examines an enormous stela in situ at the remote site of
Calakmul, the Snake Kingdom.   Its modern-day location is in the
Mexican state of Campeche.

Back to Mayan Cycle homepage

Jeremy Haladyna and newfound friends at the Copán Museum, Copan, Honduras.  On the day he visited in 2001, the site was crowded with school children visiting and taking justifiable pride in this magnificent World Heritage Mayan site. 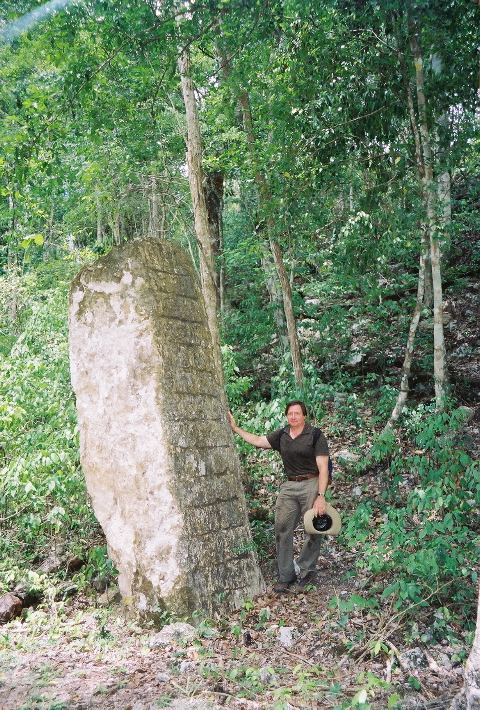 Eleven trips to the Mayan region and an investigation of some 35 years into Precolumbian thought have indelibly marked and changed the work of this U.S.-born composer. Haladyna’s Mayan Cycle now stretches to thirty-five highly distinctive pieces, including such titles as Zaquico’xol, El Llanto de Izamal, The Maya Curse Pedro de Alvarado, Pok-ta-Pok, 2012, The Oracle of 13 Sky, Copal, and the Jaguar Poems.   Among the most novel features of the Cycle is its frequent use of Jeremy's original scales (three in total) derived from the ingenious math of the Mayan calendar.

Jeremy, an accomplished keyboardist and conductor, served as director of UC Santa Barbara’s Ensemble for Contemporary Music for sixteen years (2003-2019) and created much of the Mayan Cycle during that time.  He holds prizes and academic qualifications from three countries. A laureate of the Lili Boulanger Prize and diplômé of the history-rich Schola Cantorum on Paris' Left Bank, he also holds an advanced degrees from the University of Surrey (U.K.) and the University of California. He taught undergraduate composition to scores of young composers at UCSB from 1990-2019 (29 years) after being named to its permanent faculty in March, 2000.  He is now Emeritus Faculty.  His own past teachers include William Kraft, Karl Korte, Eugene Kurtz, Jacques Charpentier, Peter Racine Fricker, John McCabe, Sebastian Forbes, and Joseph Schwantner.

In addition to actively performing on its concert platforms, Jeremy taught orchestration and contemporary techniques for UCSB.  As pianist, composer, conductor and organist, he has long been committed to the espousal of new music. His own music has been heard at Carnegie (Weill) Hall; King's College, London; St. John's Smith Square, London; South Bank Centre, London; the Monday Evening Concerts, Los Angeles; St. Paul's Cathedral, London; All Saints Church, London; BMIC, London; and the National Museum of Art, Mexico City. In December 1999 he premiered his The Vision Serpent at the Chopin Academy, Warsaw during a guest residency, also lecturing on the Mayan Cycle. In October, 2000 he was invited to present excerpts from the cycle as the subject of a colloquium at Kings College, London. In 2009 Mayan Cycle elements were brought to concerts in Instanbul, Turkey as part of a composer-conductor residency at MIAM. In 2009 an integral album release entirely from the Mayan Cycle appeared on innova; a 2nd innova issue followed in 2012, and a third all-Mayan Cycle disc has appeared on Centaur in 2020.   As a performer, Jeremy has at various times appeared on at least five labels--innova, Centaur, Albany, Neuma and CRI--in the several roles of pianist, organist, percussionist and even...turntable-ist.